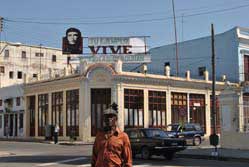 First Obama, then the Rolling Stones, then Chanel. It seems that everybody who’s anybody is going to Havana. And who can blame them? It’s hot and colourful with music and dancing in every restaurant and bar. Best of all, there is a new sense of freedom and liberation about the place, last witnessed there in 1959.

Cuba has been stranded in a political, economic and cultural limbo for decades thanks to the Revolution for Independence and Freedom which led to the US breaking ties with the country, with resultant trade restrictions, embargoes and less access to certain basic goods and technologies. But are the Cuban people welcoming the USA back into the fold?

Some and some, I would say. I’m no expert, but research for Last Dance in Havana led me to ask the question of tour guides and taxi drivers, waiters and buskers, during my visit to Cuba last year. And everyone had something different to say.

Some Cubans continue to support the Castro regime. They proudly cite Cuba’s excellent health service and efficient education system, undeniably a stark contrast to the era of 1920 – 1950s when Havana was used as a playground by rich Americans. Those were days of extreme poverty for many Cubans and Fidel Castro’s determination to change this state of affairs can be seen in the continuing existence of ‘supply shops’ which ensure everyone has sufficient food to live on – just.

But that isn’t the end of the story. How frustrating must it be not to be able to travel freely, not having access to the Internet, being unable to earn a decent living wage?

So it’s hardly surprising that many Cubans will welcome Obama, Mick Jagger and Chanel’s catwalk with open arms.  Everyone should visit Cuba if they can. Do it while classic American cars still line the streets of Havana and before there is a McDonalds on every corner. Cuba is still set in a kind of magical and musical time warp. But I suspect that it won’t be there for long.